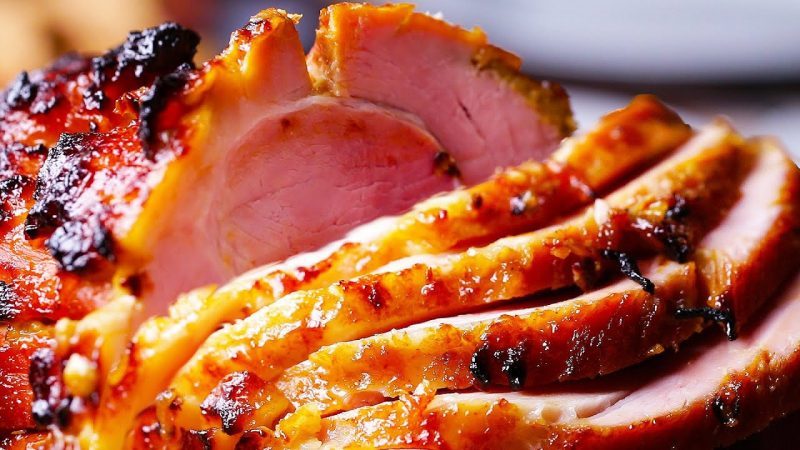 Honey glazed ham is an absolute thing of divine beauty. The ham comes from the hind leg of the pig. The ham needs to be simmered for three and a half hours with a bunch of seasonings. Place the pork into a pa with some water and begin to get extra flavor; peppercorn, bay leaves and chopped onions, carrots and leek. place the seasoning into the pork and bring that to boil then drop it to a simmer and let it tickle away for three and a half hours.

The glaze is what really smashes the ham, mustard and ham is everything you want in this. Pour 250 grams of honey into a pan, add a hundred grams of sugar and then add a quarter bottle of Madeira, get that in, bring it up to the bubble and then reduce it down a little bit and get it off.  What you are looking for is the big bubbles which will tell you it’s going to turn into a proper glaze. Remove your cooked ham and let t cool down, make the glazes core it up and toss it in the oven.

Score the ham one way and then the other and that helps with crisping up rather than a whole big skin. Next, put the mustard all over the ham then stud the ham with the cloves. Cover the ham all over with enough honey. So, place the honey glazed ham in the oven at 200 degrees Celcius for 30 minutes. After the first 30 minutes of baking, remove from the oven and glaze the ham again and place it back in the oven. Remove the honey glazed ham once done and let it cool and begin to slice.! The result is a moist and succulent dry ham.

For the honey mustard glaze;