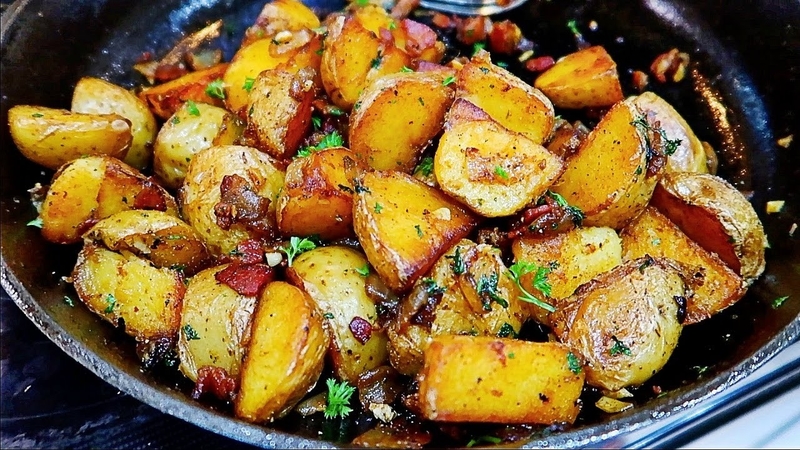 This easy fried potatoes recipe is best accompanied by eggs for brunch, you can also serve them with chicken for dinner and enjoy. This
the dish is made in a cast-iron pan, it’s really good and so easy to put together. Start by boiling some gold potatoes, place them in a pot with salted water and boil them until they are soft.

While the potatoes are boiling, place the cast iron skillet on heat and place in some bacon and render the fast out of the bacon until it gets crispy then remove from the heat and set it aside. Use the oil from the bacon to sautee some onions until they get caramelized and fragrant then take them out of the pan.

Once the potatoes are partially cooked from the boiled water, remove then from the heat and cut them into four pieces and make sure the pieces are equal. Melt some butter into the skillet and for the leftover bacon grease in the pan, they are going to add more flavour to the potatoes. Once the butter has melted, toss in the cut potatoes into the pan and arrange them in a single layer then cook them for three minutes on each side.

You want them to get a beautiful golden brown colour. Add the bacon and onions then toss them around the pan, also, add some minced garlic for extra flavour then season with salt and pepper. Mix everything together then finish with fresh parsley then serve. The potatoes should be so crispy on the outside and very soft on the inside.