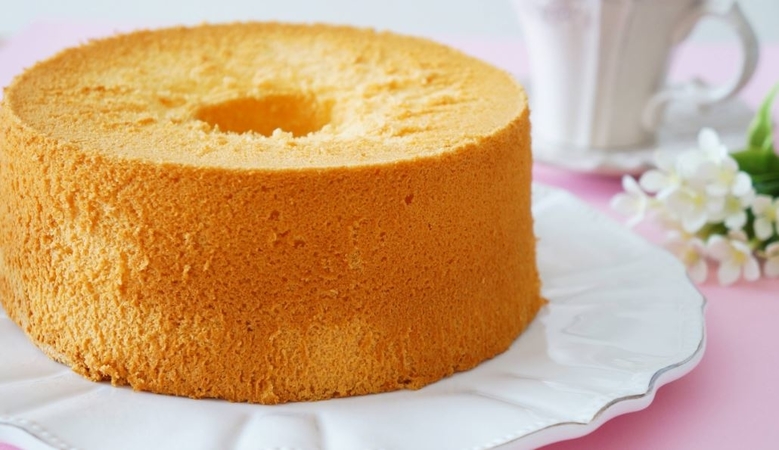 This vanilla chiffon cake is a light and spongy cake that’s similar to angel food cake. It gets its light texture from egg whites that are beaten with cream of tartar and sugar until they are stiff and shiny. Since the meringue is the main leavening agent in this cake, it is really important to take the time to beat your egg whites to stiff peaks to ensure your cake has a nice rise and fluffy texture.

Start by folding in only 1/4 of the meringue into your egg yolk batter to lighten the density of the batter, making it easier to combine the rest. As soon as you remove it from the oven, flip the cake over and cool it upside down in the pan to prevent it from collapsing. The reason is the structure of the cake crumb is not stable until it’s completely cooled. Sift flour and salt into a mixing bowl. 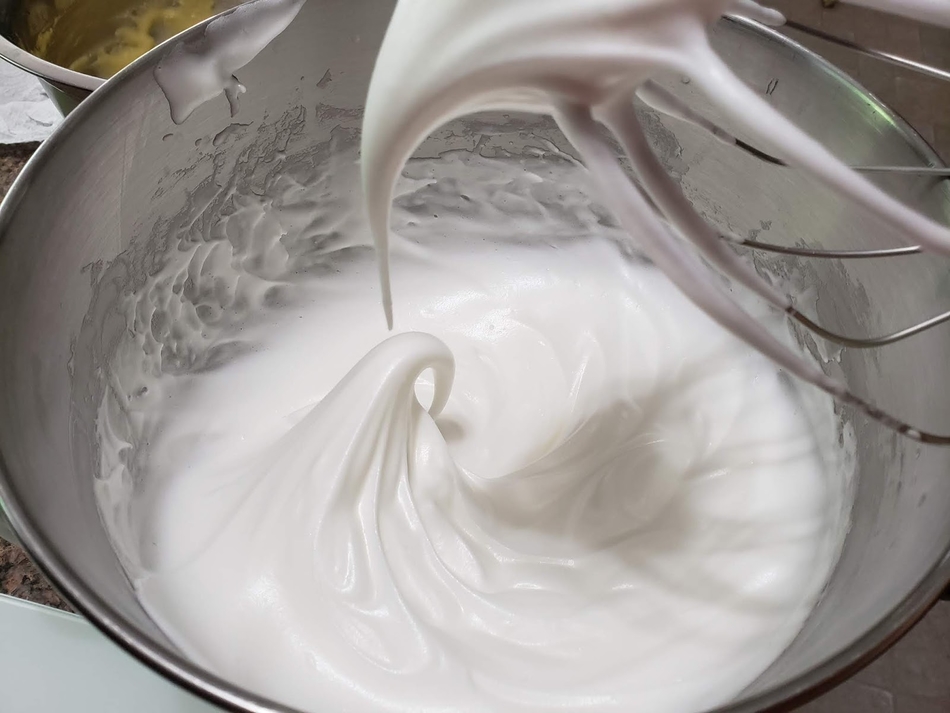 Make a well in the centre then pour in the egg yolks, milk, oil and vanilla. Whisk gently until incorporated. Set aside. Place egg whites in another clean mixing bowl and with a hand mixer or a stand mixer fitted with the whisk attachment, whip egg whites until foamy. Add cream of tartar (to stabilize the meringue) and continue beating until soft peaks form.

Gradually add sugar in batches and continue beating until glossy and firm peaks form. When you lift up the whisk, the peak will hold its shape but the tip will fall back slightly. Scoop about one-third of the meringue into the yolk batter and fold with a whisk to lighten.

Scrape this back into the bowl of meringue. Fold gently and thoroughly with a spatula until homogeneous. Pour batter into an unprepared tube pan. Tap pan against the kitchen countertop several times to get rid of any large air bubbles. Smooth top with an offset spatula. Bake for 50 to 60 minutes or until a wooden skewer inserted in the centre of the cake comes out clean.

Drop cake pan on the kitchen countertop at a distance upon removal from the oven. This will release any gas trapped in the cake cells and minimize shrinkage. Invert pan on a wire rack to cool completely before unmolding.