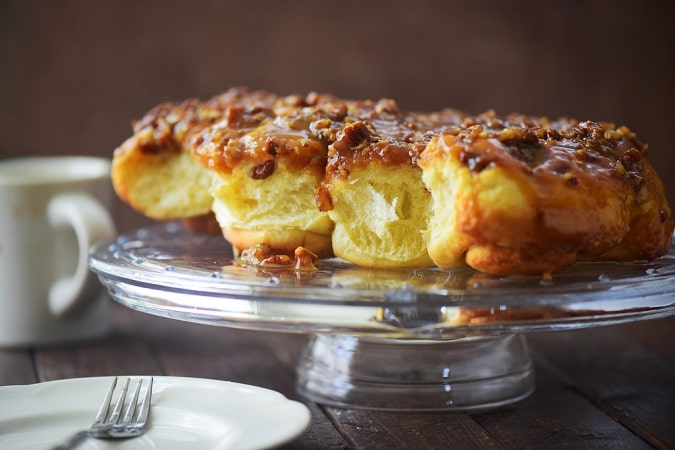 Sticky buns are a bakery bestseller and its no wonder they are made of rolled leavened dough and filled with a sticky sweet filling. Now, it starts with a soft dough and part o hat makes a soft yeast dough is actually the dairy component. In this case, we are going to use a cup and a quarter of 2% milk heated to just above body temperature. Add your milk to the mixer along with a quarter cup of melted butter, add instant yeast, an egg, a quarter cup f granulated sugar and three and a half cups of all purpose flour. Beat the mixture from low to medium speed until you see the dough climb the hook, that’s when you know it is properly kneaded. On your working surface, shape your dough into a nice ball before you let it rise.

Take a big bowl and just give it a light coating of oil and place the dough. What’s important is you cover the dough completely with a plastic wrap to protect the dough so it doesn’t dry out on the top then let it sit in a warm place for 90 minutes to two hours for it to double in size before it is ready to be rolled. For the next step of the process, we make the sticky layer that breaks underneath the sticky buns. So in a saucepan, melt half a cup of unsalted butter, add to that a full cup of brown sugar and a half cup of maple syrup. Because it is sugar in its liquid state, it helps keep the gooey filling just that gooey. Cook that up until it comes to a full simmer.

To get the filling ready, use, two and a half cups of brown sugar, a full tablespoon of cinnamon. Roll out the dough into a rectangle shape then brush the dough with melted butter and then sprinkle on the cinnamon brown sugar. Now, from one long end roll it up and you don’t have to pull or stretch the dough but you want to keep it pretty tight. After rolling, cut them into 12 sticky buns and arrange it in a baking pan that contains the gooey syrup fillings. What you do if you want to serve these freshly bakes sticky buns for breakfast but you don’t want to wake up at 4 am, make them, roll them and put them in the pan and pop them in the fridge overnight.

When you want to bake them fresh in the morning, take them right from the fridge, into a cold oven set the thermometer to 350 by the time the oven preheats, the sticky buns will have proofed up and started baking them. For our fresh buns, let them sit for one hour until they puff up a little bit more but wait until they hit the oven. It takes them 45 minutes at 350 degrees until they turn beautifully golden brown. Turn the buns int a cutting board and you will be left with a gooey flowing over the buns that is hard to resist.