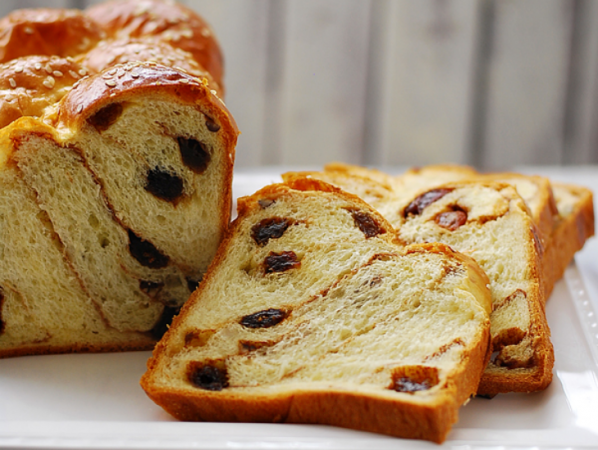 This homemade cinnamon raisin bread is a delicious, lightly sweetened yeast bread. It’s wonderful sliced right off the loaf, and it makes fabulous toast. Whichever way you like it, homemade raisin bread is a top-notch breakfast choice. Add some fresh-squeezed orange juice and a hot cup of your favorite coffee or strong, black tea, and you have a breakfast that would be right at home on a cafe menu.

You can also make French toast out of raisin bread for your breakfast. Start by stirring together milk, butter, yeast, and a little honey, and let it sit for 10 minutes until foamy. This cinnamon raisin bread recipe is one you are going to make again and again. The raisins are soft and plump. The cinnamon gives it a beautiful kick, and the eggs and fat in the dough make it a wonderfully moist bread that stayed fresh even after three days when I had it covered in foil.

Add flour, eggs, salt, and raisins to the liquid and knead it in the bowl of a stand mixer for 10 minutes. Let this soft, sticky dough double in size, which should take an hour or two. Remove the dough and stretch it out into a rectangle on a lightly floured board. Make the cinnamon filling by mixing together melted butter, brown sugar, and tons of cinnamon. Spread the cinnamon filling all over the rectangle, and roll the rectangle up. Pinch the seam shut at the end, and place the bread roll in a loaf pan. Cover it with plastic wrap and let the roll rise for about an hour then place it into the oven it goes until it comes out golden brown.