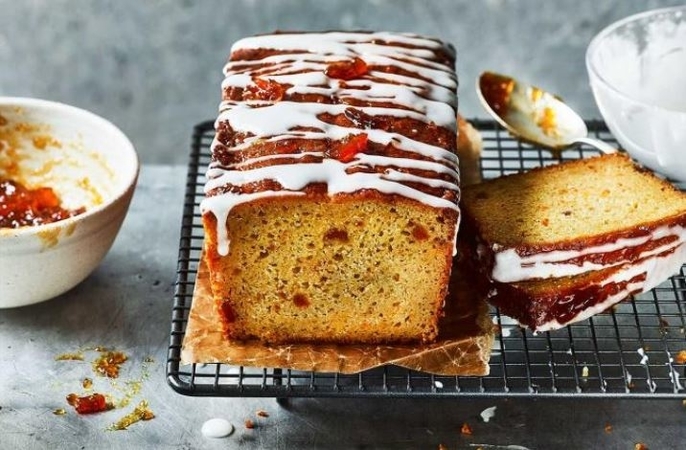 This marmalade loaf cake is really good with those coarse cut marmalade pieces in it and then a nice little glaze over the top. Start by preheating your oven then spray or grease your baking pan and set that aside. While toast and marmalade for breakfast are an absolutely quintessentially classic, this marmalade loaf cake is a great way of enjoying the bitter flavors at other times of the day. But don’t feel that you can only make this cake with home-made marmalade – a pot of ready-made will work just as well. proper marmalade is so much more than just an orange jam – it is made from bitter Seville oranges. Take your dry ingredients that is flour, salt, and baking powder and sift them into a bowl.

Take your stick of butter half a cup and just cut that with a fork right in the flour just to get some little crumby texture. Mix that thoroughly then grate about three teaspoons of the lemon zest, add sugar which is just a third of a cup then continue mixing that. Take your eggs and lightly beat them then add the eggs to your bowl. Get in your course cut marmalade, it’s delicious so just do a generous heaping teaspoon then you are also going to add t tablespoon of milk and a half tablespoon of vanilla. Mix that all together. Once you are done mixing your batter very well, place it in your baking pan then into the oven. While the cake is baking, finish up by making the glaze, so you are going to put some more orange zest in a bowl then add two tablespoons of marmalade.

Squeeze lemon juice into the mixture then microwave the topping ingredients for about 20 seconds or until you are able to easily whisk ingredients together so it can be poured over the cake. Once your marmalade cake has baked, take it off the oven and onto a mesh and let it cool. Glaze the marmalade toppings over the cake and slice it. This marmalade loaf cake is really moist and you can serve it well with a cup of tea.