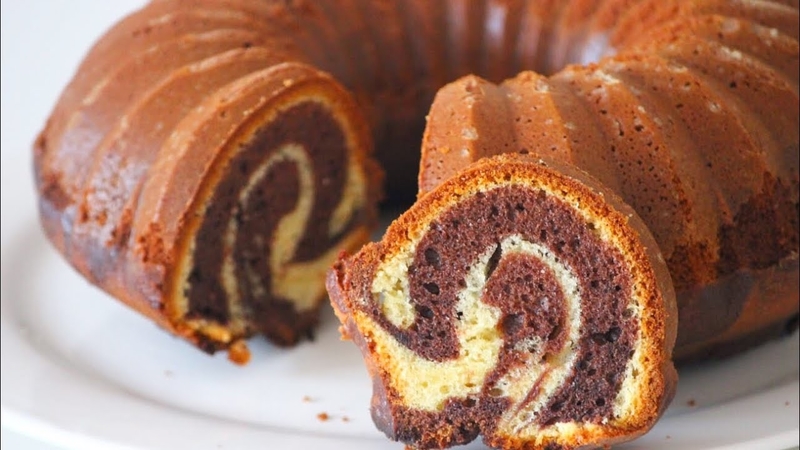 Poundcake is a dense cake with a rich buttery taste, to move to another level is the moist marble bundt cake with a ganache glaze. It always starts with the room temperature butter in a stand mixer then add a cup of sugar. The formula of this cake is a little different from the rest, beat the butter and sugar until they are well incorporated then add your beaten eggs a little at a time.

Sour cream is another secret in this recipe, place your sour cream in a cup then add two teaspoons of vanilla extract then add that into the stand mixer and beat that for a minute. Sift your all-purpose flour together with baking powder and half a teaspoon of salt. Add the flour to the stand mixer mixture on low-speed until its almost incorporated. After you are done, scoop about a third of the vanilla butter into a separate bowl and that is going to be the chocolate part of the marble cake.

Add three ounces of bittersweet chocolate that has melted, the addition of the chocolate to your batter does impact the texture of the cake. Add two tablespoon of cocoa powder, that intensifies the flavour and the colour. To fill your baking pan, you are going to use a piping bag so you can pipe the vanilla and the chocolate butter separately. Grease and dust your bundt cake pan to ensure the cake does not stick.

Start with the vanilla cake batter and pipe some dollops into each bundt mould then switch to the chocolate and fill in the gaps. Whether you are baking the marble cake in a large bundt pan or even in a loaf pan, you could still use the same technique.

The final step before popping them in the oven is using a skewer to swirl and mix the chocolate and the vanilla together. Because of their smaller size, they are going to bake for 20 minutes at 350 degrees Fahrenheit oven. Let them cool in the tin then onto a baking tray after 30 minutes. Dip them in your ganache then serve.