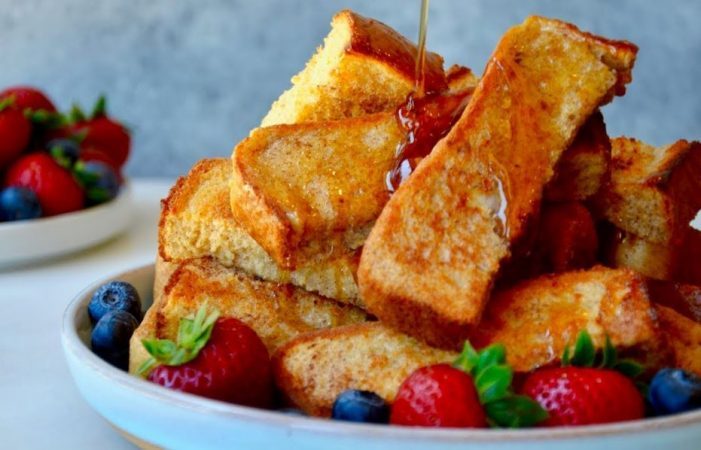 Move on to your egg mixture, add your eggs into your container then add in a little bit of milk then heavy cream and vanilla extract. Mix it all up and get everything all scrambled up and even color then set that aside. Add sugar into a container with cinnamon then you are going to put those in an interracial relationship, give that a swirl until they are well mixed. So, you have your egg mixture, cinnamon sugar mixture and your bread are ready to go. Take one of your pieces of bread and put it in the egg mixture and turn it on both sides so it is well-coated with the egg mixture. Take it out and then place it on a pan In a skillet, add butter and when it’s hot and starts to sizzle, add in the french toast sticks into the pan. Make sure you do not crowd the pan and let them cook until they are all golden brown and smelling delicious. The butter is going to get them all crispy on the outside and make them taste amazing.

Take them out of the pan and into the cinnamon sugar and coat them well and then sere them for breakfast. You=r loved ones are going to enjoy this.! French toast sticks are a great make-ahead breakfast that you could have on hand in the freezer rather than buying the store-bought kind. And if you wanted to make them healthier you could use hearty whole grain bread and cut back on the sugar and syrup. Try this baked French toast recipe and you’ll be hooked.