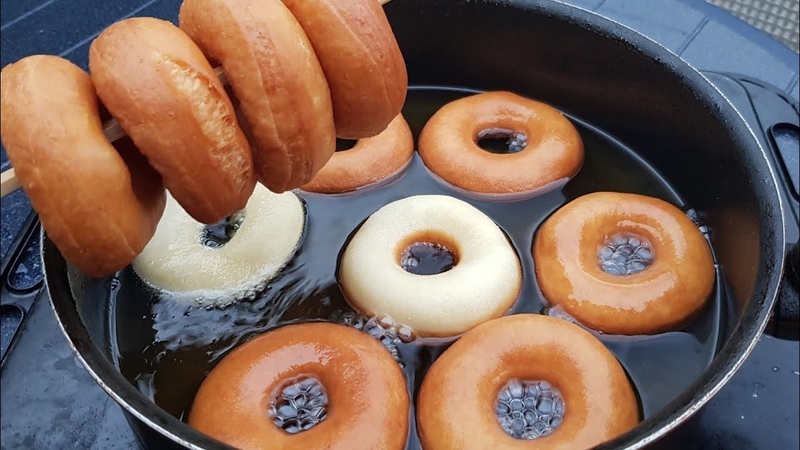 Pour your milk in a bowl with butter then begin to stir around until it is well melted. Activate the yeast in warm water, once activated, put in in the mixture, add the milk mixture and all other measured ingredients then start the mixture in a slow speed once it begins to come together, turn it up to medium.

Beat that together throughout a minute then add flour and again begin on low speed as you increase to medium speed. What we are looking for is when the dough comes away from the bowl and it a bit more sort of doughy. If your dough is too sticky, add more flour yo it until it is nicely made.

Remove the dough and put it in the oiled bowl and let it sit for one hour in a kind of warm place. Just cover it with a tea towel of with cling film Once your dough has risen, turn it to a flowered surface and give it a kneed. Roll your dough then chomp out the doughnut.

Once they are all chomped out they are ready to rise for 30 minutes. While the raised doughnuts are proving, heat up your frying oil to 365 degrees Farenheight and it is really important to have them at the right temperature otherwise they are not going to cook properly.

Carefully drop them into the oil and see them on both sides for one minute until they are golden brown. Its nearly time to eat the raised doughnuts but before that, we glaze them first which will make them taste even better.

In a bowl with sifted sugar, add two teaspoons of golden syrup or corn syrup, a pinch of salt and then a drop of vanilla extract, boiled water or milk and just whisk them together. Once done, take your doughnuts and dip them in the glaze one after the other until nicely done and its finally time to eat your raised doughnuts.!