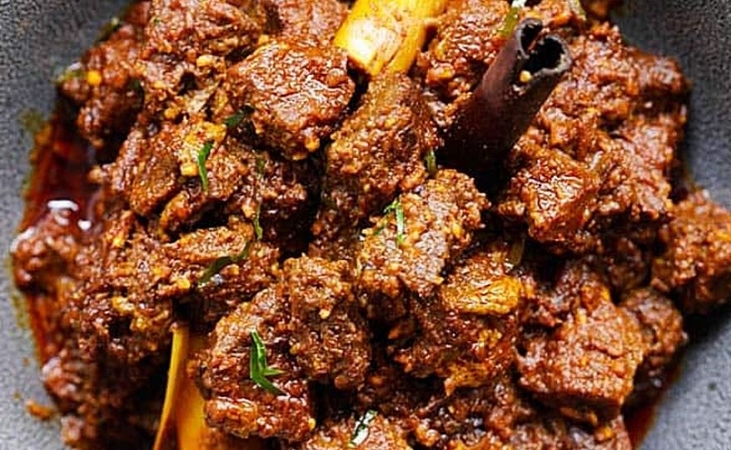 Rendang is the worlds most delicious food at least according to our study. It is rich and flavourful at the same time with the coconut paste that gives it an aroma like nothing you have ever had. Rendang is a traditional dish from Indonesia and also Malaysia, so if you have rendang in your country then you know how delicious this is. It is a dry and concentrated curry and super flavourful.

Once the coconut milk has reduced to a point where the coconut oil is sizzling and starting to fry the paste, add in the beef. You can use whatever you prefer for your beef stew, short ribs and you can also make rendang with chicken as well. Add in about one and a half cup of coconut milk, this dish is very easy, once you have made the paste its just dump and stir from there.

For the seasoning, add some salt and tamarind so it’s going to be a little salty and a little sour and the sweetness is going to come purely fro the reduced coconut milk. Let it cook for two and a half to three hours in a very long slow simmering. In the beginning, you can let it on high heat but as the sauce starts to thicken, let it cook on the lowest heat, scraping the bottom often so the curry paste doesn’t stick at the bottom of the pot.

In the end, you want like a luscious thick sauce coating the beef, you don’t want it to be like a soup. So, in rendang, you want to add some kaffir lime leaves and it will add just a bright citrusy aroma and it will sort of counteract the heaviness of the curry. For the last ingredient, Thai people have toasted rice powder while Indonesian have toasted coconut paste and it’s going to add the most wonderful toasty aroma.

You just take a dry shredded coconut and toasted in a dry pan until its brown, not golden brown, deep dark brown, you want that iconic toasted coconut aroma.

Grind it until oily then add about a tablespoon of it in the dish and stir that in. The beef should be fork-tender, it should pull apart with your fork so make sure you check that for doneness

To make the paste;