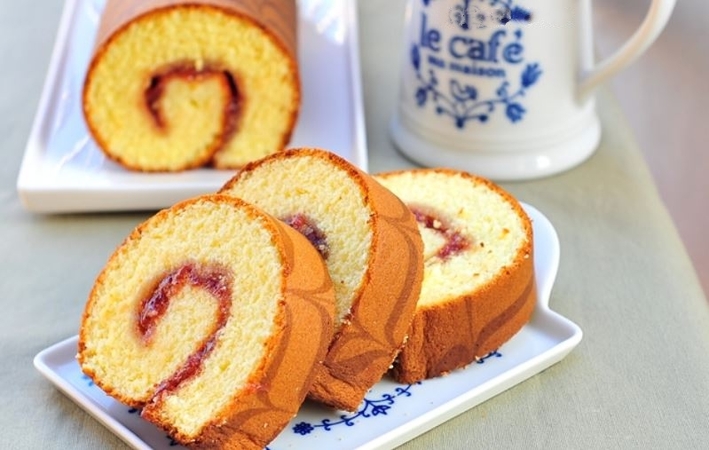 Jelly roll cake are thin sponge cakes that are filled then rolled. They give a pastry chef a wonderful range of creativity. Aall jelly roll cake starts with the sponge cake and you should master this skill. The basi sponge cake fo this recipe uses four whole eggs, it is important the eggs are at room temparature so they whip to a fuller volume. Also, save the yolks in a separate bowl because you will also whip them. Add a pinch of salt to the whites and beat them until light adding regular granulated sugar in between. Set the whites aside after beating them.

To the yolks, sift in a quarter cup of icing sugar then whip them until they are thick and creamy and doubled in volume. Add in a teaspoon of vanilla and whisk it in. Sift in cake and pastry flour and using a whisk, quickly fold in the flour. Add in half of the whipped egg whites and fold them in until almost combined. Sift in the remaining flour and continue folding it in the batter. Add the other half of the egg whites and use a spatula to fold everything together.

Make sure the whites are fully incorporated into the yolk base. It takes a special pan to make a jelly roll. Line the pan with parchment then pour the batter and spread in the pan. Bake it at 350 degrees for 12 minutes, taste the doneness of the sponge cake by giving it a little press, when it springs back, you know they are baked all the way through. The real secret behind a jelly roll cake is creating jelly roll memory by working with it while it’s warm, rolling it up then letting it cool rolled up.

Take the tea towel, tuck it in and start rolling. After teh cake cools completely in the tea towel, unroll it and spread evenly with raspberry jam then roll it again. Slice it to reveal that beautiful interior.