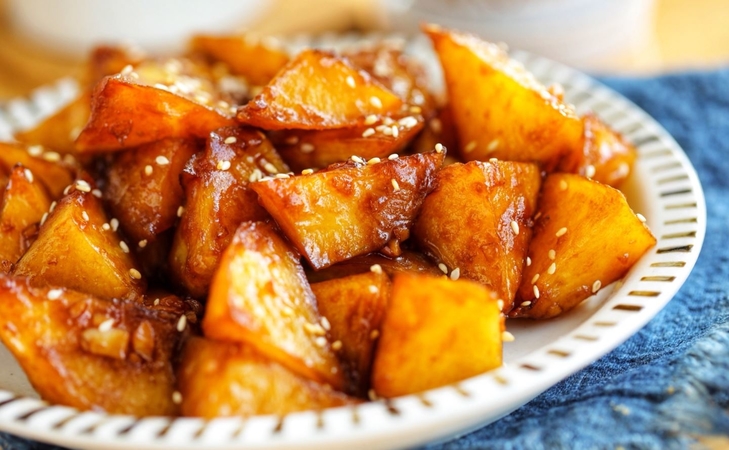 Delicious spicy garlic and chili potato are crunchy on the outside and soft on the inside with a slightly spicy and garlicky flavor. Most people use plain salted water but we are not most people. So we are going to flavor our water up we are going to add some salt, some smoked paprika, a little bit of cumin, and bay leaves. We are going to bring it up to a simmer. We are going to let it simmer for about 10 minutes to extract the flavor.

And while that simmers for 10 minutes we are going to prepare our potatoes and we are using good old fashioned Idaho russet potatoes. You need to stay away from red potatoes because they are too waxy for this recipe. You want to get potatoes with starch. So cut them in half and each half cut lengthwise twice into three pieces and the three pieces cut them across to make like 1-inch cubes. You know the drill pick a shape to pick a side and stick with it.

You can just put those in cold water until you are ready, by this time our seasoned liquid has simmered for 10 minutes. Drain the water from the potatoes and dump those into the liquid mixture. It is going to take probably 3, 4, 5 minutes to come to a simmer, you can just leave it on high heat. Once it starts boiling again you gonna cook for about 4 to 5 minutes. You want them almost tender they shouldn’t be too firm and yet they shouldn’t be falling apart tender like you are going to make mashed potatoes.

You want to pull them out just before they are all the way did and the easy way to check for this is with a tip of a paring knife. At a point of 90% cooked use your strainer and pull those out of the liquid and transfer then to a wire rack to cool. Now, this is very critical you want them to air dry and cool down them completely before you fry them. This is what gives them that crusty crunchy texture. While we are waiting let’s make the spicy aioli to top this with.

In a motor add sliced garlic with a pinch of salt, to it add smoked paprika and a little Chipotle and crush it to the paste and add on some mayonnaise and a nice big splash of sherry vinegar to add the acidity some people use lemon instead. Stir it in and give it a little shot of tomato paste. Taste and adjust the flavors and add in as much as you want. Stir it in and refrigerate until needed of course it can be done ahead of time. Also, feel free to make extra it is good on literally everything.

Last but not least do a seasoning salt to put on the potatoes one fried. To make it in a bowl add fine salt to it add freshly ground black pepper, smoked paprika, some more Chipotle it is gonna give it a little heat. For extra heat add cayenne but don’t forget the aioli is also spicy then give it a stir using a spoon. And that is done we are ready to fry, to fry you need a cast-iron skillet on high heat with about an inch and half of the vegetable oil in it we don’t need a thermometer just throw a potato in and when it starts bubbling viciously we know the oil is hot.

Once the oil is hot put in our now dried and cooled potatoes and they are going to fry up awesomely for about 5 to 6 minutes you will know when they become golden brown and extremely crunch. Take them out of the oil and put them on a kitchen towel to remove extra oil. Once you are ready to serve, throw them in a bowl and give them a toss with the seasoning salt, throw them out on plates and then eat them with a toothpick which makes it even more fun.

Do not forget to top them with your spicy aioli, maybe some fresh parsley stick in some toothpick and it is done. This spicy potato is one of the world’s great potato dishes of all time.

For the boiling liquid:

For the spice blend;