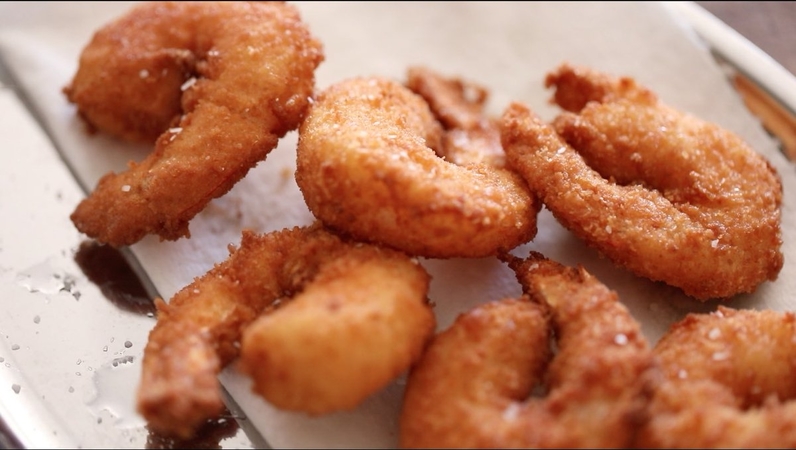 This recipe is all about making a killer coconut shrimp from scratch and using that to make a toasted warm sandwich with few other complimenting ingredients. In a bowl mix all purpose flour with black pepper, paprika, chili powder, celery salt. Once that all finished up, whip up a whole egg with a splash of milk for about a minute or so in a separate bowl. Then in another bowl, mix together the sweetened coconut and bread crumbs until thoroughly combined. Once the breading station is all positioned, grab your large 15 to 20 shrimps, make sure they have been peeled and deveined as well and start coating them first in the seasoned flour then in the egg mixture and finally a generous coating of coconut bread crumbs.

Now that all the shrimps are all breaded upstart to fry them several at a time in a heated oil mat 375 degrees Fahrenheit. Make sure not to crowd the pot and they should not take any longer than three minutes to cook as well as have an areally nice golden color on the outside. As always with fried items, make sure to blot off excess oil by placing them on a towel and season with a pinch of salt once when they come out of the fryer. To finish that all up as soon as the coconut shrimp are done, you want to toss up a split top bun or an ordinary hot dog bun. Smear some spicy mayo or crema down the middle basically a mayo or sour cream seasoned with lime juice then pace the coconut shrimp down.

Last but not least some freshly picked fennel tops cilantro and basil to finish for a really nice refreshing crunch shredded lettuce is also a really nice simple touch. The spicy coconut shrimp is done and it looks fantastic, die into that and run through the flavors and tell us how you did.