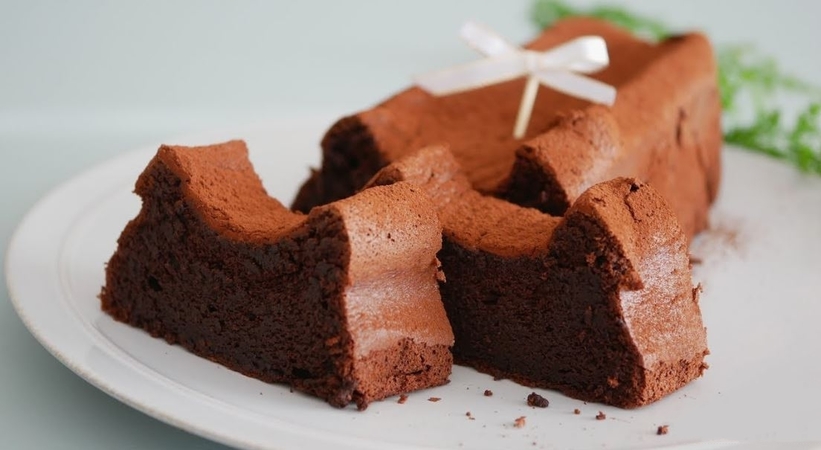 This is a delicious and sweet chocolate souffle, you can keep this for a special occasion to impress your guest. So, souffle means to blow or to puff and the steam is what makes the souffle rise. Souffle is made around two things, first is of a cream base and then of foam, usually egg whites. To start up, prepare the mould and brush them with melted butter, twice instead of once.

Because we absolutely don’t want the souffle to stay stuck at the bottom. Place it into the fridge to chill. For the creamy base, turn on the heat to medium then place in a saucepan and pour in 300 ml of milk. To that add 2 tablespoons of corn starch, stir that nicely and don’t stop stirring otherwise it will burn. While that is slowly heating up and keeping an eye on it, you want to break up 300 grams of dark chocolate, at least 70% dark chocolate, very intense in terms of flavour.

As soon your milk reaches a simmer, pour it over the chocolate bits. Now, combine those gently until you have a smooth texture, so, at this time of the recipe you have to resist the urge to dip your whole body in this mixture. To make this base a bit moisture, you are going to need two egg yolks but save your egg whites for later because you are going to need them.

Keep in mind to buy the best quality eggs you can get. Combine your eggs with the chocolate mixture then move in and start mixing those egg whites. You already have two egg whites from the previous steps, so in a border of the mixer, add three egg whites and one teaspoon of caster sugar. At first, you want to mix this slowly, just to combine the egg whites with the sugar and then you can increase the speed.

And slowly, slowly add 5 tablespoons of sugar, you are looking for a firm peak that looks like a birds peak. Right, so this is the technical part of the recipe, you want to mix the creamy base in egg whites but not exactly mixing. In fact, we are going to fold, keep in mind you add the creamy base gradually. So folding mean taking the egg whites from the bottom and placing them on the top.

The reason why we are folding instead of stirring is that we want to keep the air in the mixture. If you just stir, you will lose the air and the souffle will not rise before we pour it in the mould, we need to coat them another time with butter and a sprinkle of sugar. Now the reason we are coating the size with caster sugar is that we want to create some tiny little bearings that will help the souffle rise.

Begin filling your ramekins then place them on a baking tray and into a preheated 360 degrees Fahrenheit for about 20 to 22 minutes. Once done, they will be nicely puffed out, dust it with powdered sugar then have a taste.!