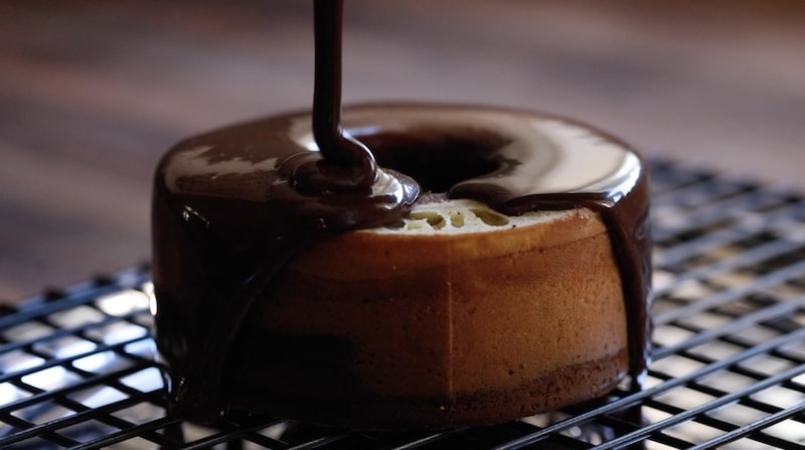 The first time I tried this mirror glazed Baumkuchen was a while back, also called the tree cake will become an obsession that will come naturally after the end of our recipe. First up, add eggs t the mixing bowl along with sugar, a path of salt and vanilla extract then whisk it for a minute and transfer it to a boiling pot. Use a boiling pot of water with another bowl and bring the egg mixture to 170 degrees Fahrenheit. As soon as it reaches the temperature, remove it and pour the custard mixture into a stand mixer and whip it on high speed for about 10 minutes. Meanwhile, take a minute to brown your butter, add a few pats of butter to a sauce pot and simmer it on low heat until th butter starts to darken. As soon as it starts to darken, remove it from heat and let it cool.

Add the melted or browned butter to the batter in the mixer a splash at a time while the mixer is running for another minute. Next, you are going to sift in the cake flour and gently fold it in until it mixes well in the batter. After the batter is ready to go, prepare your baking container with a parchment paper. Ladle in a thin layer of batter and stick it under the broiler to get all caramelized and beautiful on top. Depending with ho many layers you want or having a batter for, you could do this layering process for quite some time depending on your appetite or desire. Repeat this process enough times to get at least 10 layers. Once the layered baking process is done, remove the cake one last time from the oven and let it cool down for about 10 to 15 minutes before removing it from the container. Next, you are going to trim the top of the cake with a serrated bread knife to get the flattened top and bottom since its going o be glazed later on.

Get a small saucepan on low heat and add in the water corn syrup and sweetened condensed milk then bring it to a simmer. Chop some beautiful dark chocolate into fine pieces then add it to a small mixing bowl and pour the simmering sugar mixture right over the top of the chocolate and then you are going to stir until the chocolate is thoroughly melted. Once the chocolate glaze is ready to go, transfer it to a container and that you can easily our from and let the temperature cool down to around 90 degrees Fahrenheit. Grab the chilled cake out of the fridge, place it on a baking tack and begin to pour the chocolate glaze until every inch of th chocolate is covered. Allow the glaze to stiffen a little bit before slicing your Baumkuchen cake.