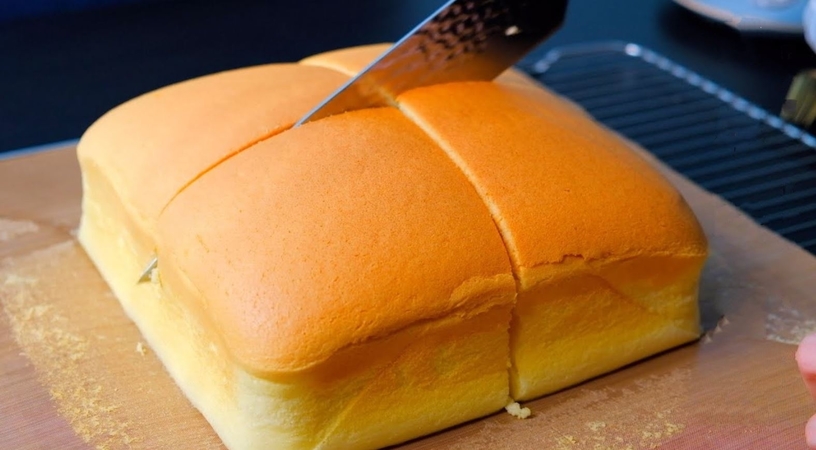 This cake is as fluffy and soft as it looks. For this recipe, we will need all-purpose flour, milk, butter, egg white, egg yolk, and sugar. Make sure that everything is in room temperature We begin by first making the batter. Melt the butter in a saucepan under medium-low heat until the side of the pan have little bubbles popping out and then remove from heat. Add the sifted all-purpose flour into the butter and mix it until it becomes a paste. After it is done gradually add the milk mixing it in and continue until all the milk is added into the paste.

This will prevent the paste and milk from separating. Add the egg yolks gradually into the mixture as you mix it in. Continue doing so until all the egg yolk is mixed. After you are done set it aside. Beat the egg whites. By pour the egg whites into a bowl and whisk it until it starts to foam and become bubbly then add cream of tartar and continue mixing it for a couple of seconds and slowly add in sugar as you mix. When the egg whites look like fluffy white it is done. So turn to low speed and mix to get rid of large bubbles.

Take the egg white and mix it in the egg yolk flour mixture. Add the egg white gradually as you fold it in. Pour everything back into the big bowl and fold it in. Fold it in until no more traces of egg yolk can be seen. Pour the mixture into a lined sheet tray, before you put into the often give it a couple of taps to remove the bubbles. Then bake it. Do not forget to place the cake in a water bath. To prepare the water bath in another bigger tray pour in some hot water and put the cake in.

Bake the cake in a preheated oven of 350 degrees Fahrenheit. Turn oven down to 340f and bake for 15 minutes then 325f for 50 minutes. After it is done baking turn down the oven leave the oven door open to about 10-15 minutes until it cools down. This prevents the cake from deflating just do not touch the cake while it is cooling. Pull it out let it sit for another 10 minutes. Then gently cut out the sides trim it out to make it look pretty.