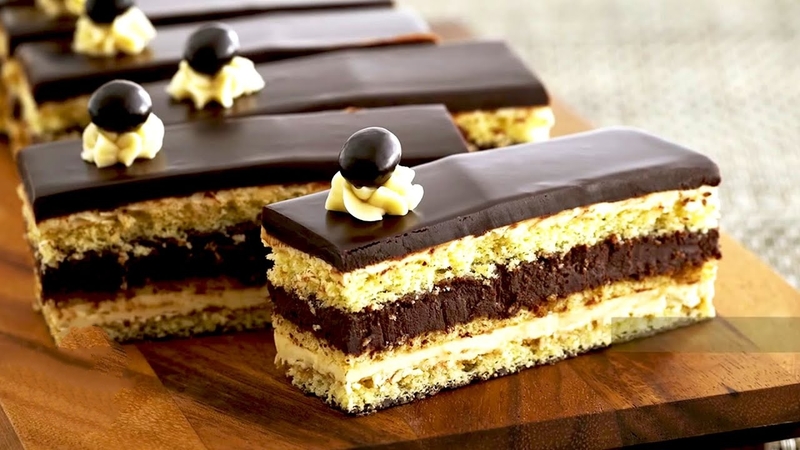 This cake has a layer of thin almond sponge cake filled with coffee buttercream but in the center is a layer of chocolate ganache and on top is a layer made of chocolate ganache. In a bowl, ad your chocolate chips and hot cream then gently melt them together. To make the almond sponge cake, add two egg yolks and one hile egg at room temperature in a stand mixer add sugar then beat until it is pale and has doubled in volume. In a separate bowl, add in ground almonds and then sift in cake and pastry flour then stir that to combine.

Take the two whites from the yolks and whip with two tablespoons of sugar until they form a nice peak then fold in the whites into the yolks mixture. Fold in the flour and almonds until well combined then pour in a baking sheet, they need to be spread over a thin layer and the pan size is about 11 by 17 inches. This style of cakes suits a hot oven, bake in a preheated 400 degrees oven for 8 minutes to bake. Once cooled completely, cut the cake sheet into three and place the first layer on your working surface and cost it with melted chocolate and spread it evenly. Pop that in the fridge to set while getting the coffee buttercream ready.

Get two egg whites separated and while whipping, add in two tablespoons of sugar just to get the whites foamy. Once the chocolate has set on the first chocolate layer, remove from the fridge and turn it upside down and then brush with coffee syrup then add buttercream and spread it evenly Place the second layer of the cake and then brush it with the syrup. Spread the layer with chocolate ganache then the final layer of the sponge cake and brush with coffee syrup.

Pipe the remaining buttercream on top and the final layer is the ganache glaze. Pour the chocolate ganache over the buttercream and then refrigerate just to set the glaze and the filling. Trim the edges of the cake and that will reveal the beautiful layer within. Cut the cake into equal sizes and serve.

For the coffee syrup;