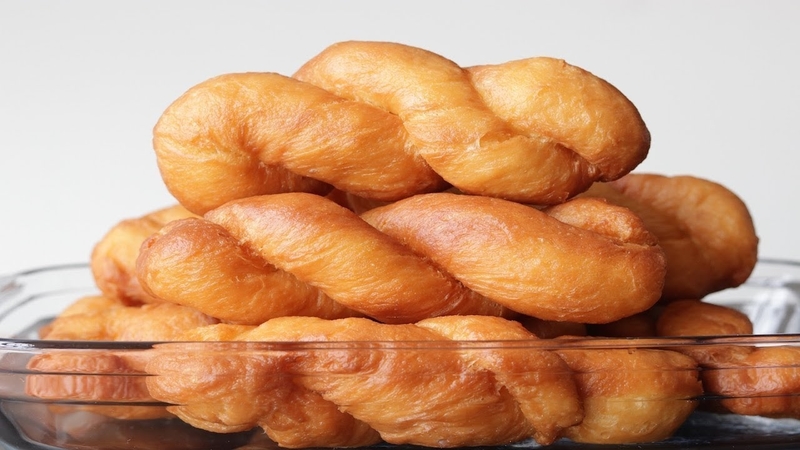 Twisted doughnuts are yummy and easy to make dessert. These twist doughnuts fry up crispy on the outside. While the outside has a nice crunch, the interior of the doughnut is light, fluffy, and pillowy. The twisted doughnuts will slightly deflate with each bite, but it’ll bounce back to its original shape in a few seconds. Add half a cup of sugar in a bowl of melted butter then add milk, crack an egg then mix the ingredients well. Add yeast to that ingredients then mix the wet ingredients to the dry ingredients and begin to work on them to form a dough. Once your dough is ready, cover it and let it rise for an hour or two until it doubles in size.

Remove the dough from the bowl after it has risen and started working on it on the baking surface. Lightly coat the surface and begin to knead the dough for a few minutes. Cut the dough into halves producing approximately 16 doughnuts and shape them into dough balls. Roll the dough one by one and, roll it out a bit starting from the center then roll them out. Take one piece and form a rope with it. Then using both hands, roll both ends of the rope in opposite directions until it creates some tension. Then you hold up and keep twisting with both hands in opposite directions until it forms 3-4 twists.

Press the ends to seal them together. After forming the twists, you let them rise for a few more minutes then you fry them. The frying is the easiest part. And then comes the coating with granulated sugar and the eating these amazing twisted doughnuts.