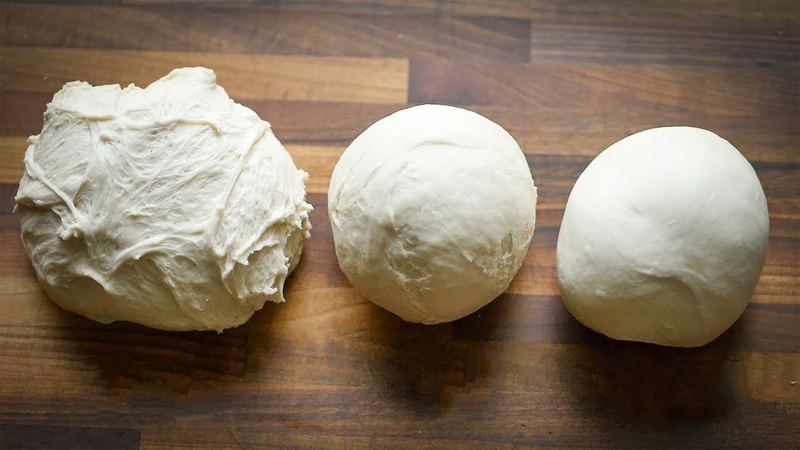 There are three different types of dough that leavened dough, dough made with boiling water and unleavened dough. This is mainly about their textures and how to use them for your home baking. Start by opening a bag of flour and add 200 grams of flour in each of three bowls. The firs bowl is for making teh unleavened dough by adding yeats and warm water.

Knead it together until the dough is well-formed. The second bowl you will be making the dough by adding salt and boiling water. Let it cool down a bit then knead the dough. The third bowl, you will be making an unleavened dough by adding salt and warm water. Knead it into a dough and set it aside. Cover the three bowls and let them est for at least two hours.

After two hours, the side of the dough will be the same in the second and the third bowl but the first bowl the dough will have doubled in size. Th leavened dough can be stretched, so teh dough has elasticity and can’t be stretched too long. This dough also has lots of bubbles in the inside, the bubble texture is very useful in making steamed buns or bread which are very soft.

For the dough with the boiling water, it breaks when stretched and there is not much elasticity on the dough. Since most of the flour has been cooked by the boiling water and only of gluten left in the dough, you can easily roll it out and make it very thin. Most of the time, this dough is used with other types of dough.

This dough can also absorb more water which means softer texture in the final product. For the unleavened dough, it can be stretched for long which means that the gluten was well developed. This dough can be used to make dumplings and noodles.

If you understand these three basic types of dough, you can use them in your own dough making to make the textures and taste which you want.