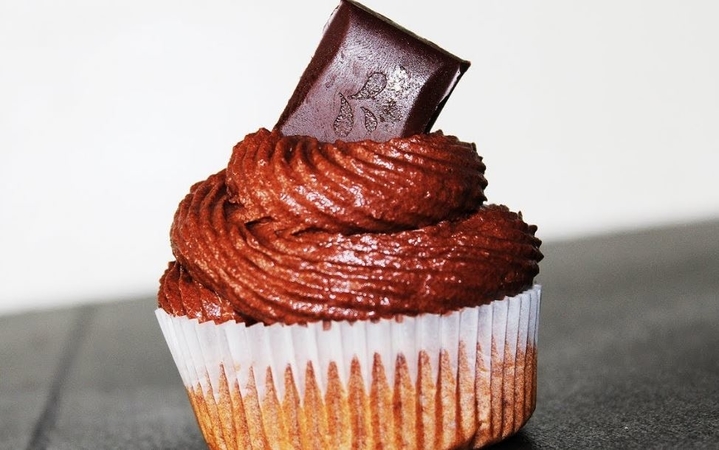 The perfect chocolate buttercream is light, fluffy and decadent. Buttercream is pretty simple but they are definitely some tips and tricks that make a simple buttercream turn into one of the most delicious things you will ever taste. Place your butter in a bowl of a stand mixer or a large bowl if you are using a hand mixer then mix that on medium speed before increasing the speed to about five minutes or until the butter is pale. Make sure to use a spatula a few times to scrape the sides of the bowl so there is nothing getting stuck. When your butter is incredibly light and fluffy its time to start adding your sugar. You are going to use icing sugar for this recipe also known as powdered sugar or confectioners sugar depending on where you live in the world. There are all the same ingredients, just make sure you not using regular granulated sugar as it won’t work.

You will need 5 or 625 grams which may seem like a lot but you will need this much. Vanilla buttercream only needs three cups but you will also be adding cocoa powder to this recipe, the extra sugar helps to balance out the sweetness and take away any bitter flavor from the cocoa powder. Its easier to add your sugar in thirds, so it incorporates faster and you don’t end up losing half of it outside the bowl. Mix on low-speed first until it is mostly incorporated before turning the mixer up higher. When you are ready to add the last lot of sugar to the bowl also add the half of cocoa powder. Juar regular unsweetened works best here. Mix the last of the sugar and cocoa powder on low speed until it is mostly incorporated. It should be extremely thick and not resemble much like the buttercream but you will be still be adding another ingredient. You are not using real chocolate in this recipe because the cocoa powder carries so much flavor and the buttercream already has the perfect texture so there really is no need for real chocolate.

Turn your mixer on to low and steam in about half a cup of milk or cream. Start off with a half a cup then check the consistency, as the milk or cream incorporates you buttercream should loosen up and start to look light and fluffy. Add more milk if it’s still too thick but just a dash at a time. Give your bowl another crap down to get all of the sugar and butter that has stuck to the sides and add a touch of vanilla essence. Mix it on low speed for another few minutes. Even though this is chocolate buttercream, the vanilla really depends on the chocolate flavor. You should be left with moist softest,