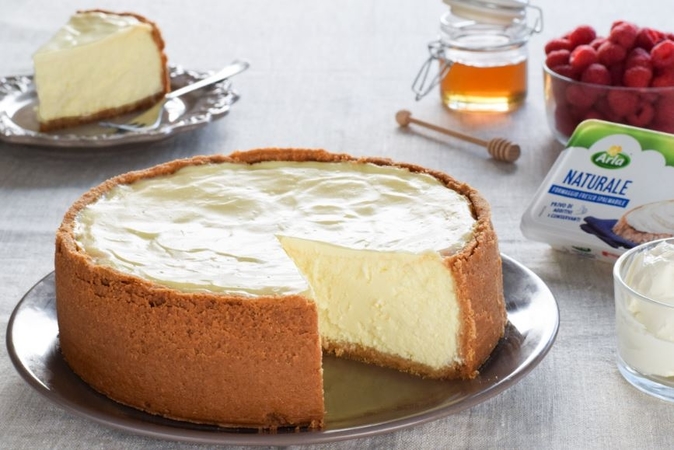 Cheesecake is a luscious dessert made of a creamy sweet cheese and cheese filling. Ad one cup of graham cracker crumbs in a bowl then add a couple of tablespoon of sugar and melted butter then stir until they are well coated. Press the crust into the bottom of the pan then place it in a 350 degrees oven for 10 minutes just to set the crust. Add softened room temparature cream cheese to a stand mixer and start beating it adding sugar in between the process a little at a time. The next thing you are going to add in the stand mixer is a little corn starch, cornstarch adds to thet velvety texture in cream cheese, add in two teaspoons of vanilla extract and set the stand mixer to medium-high speed.

Add in three whole eggs then one egg yolk for that added richness. While adding the eggs, make sure you keep the mixer on low speed, you don’t want to work too much air in the cheesecake at this point because it will expand with the heat in the oven and then contracts as it cold and that is where a crack can sometimes develop. The last ingredients to add is the signature ingredient in the New York style cheesecake is the sour cream, three-quarters of a cup and this just takes the New York cheesecake over the top. Add in the mixer a beat it for a minute and the cream cheese mixture is don. Remove the graham cracker crust from the oven and give it time to cool before adding the filling. Once cooled, brush the sides of the pan with melted butter and te add the beautiful cream cheese then pop it in the oven.